From The Anti-Fascist Network

Reports and pictures confirm the National Front have pulled in about 60 extreme fascists to the heavily policed white pride rally. The police chopper is up for this? Pathetic!

Antifascists gathered with the UAF have around 300-400 participants. It appears that a few militant antifascist groups roaming Swansea have been stopped by police and forced to join the UAF demo or sit in the cells for the day.

More news will follow, there may be a few local fascists hanging around later. Out of towner scumbags (98%?) will be making their way back home by train and car after the police bus them to a safe distance and out of the reach of Antifa’s. If you have a National Front member in your town you may want to collect them from the station to make sure they get home ok!

Here’s a picture of a redwatch photographer looking lonely (tweeted by EDL News): 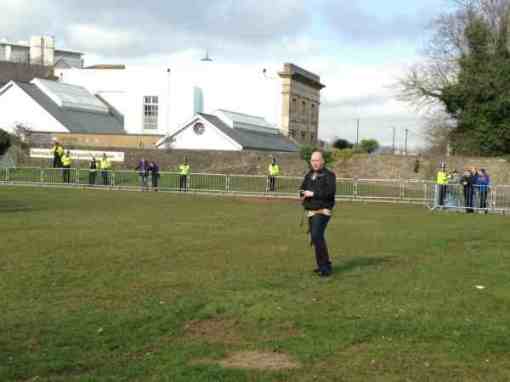 The White Pride skum came along, 40 of them, they didn’t get their march and stayed for a hour before being bussed out, for everyone of them there were 5 across the way, chanting and jeering and letting them know, their hatred isn’t welcome in the pretty shitty city.

Meanwhile several groups of Antifa made their presence felt, in and out, as the police came out in force waving around half a dozen “sections”. No Antifa arrests tho some time spent being detained for having the dangerous weapon they call a flag.

Much respect and love to all the people who came together from across Swansea whether you were in the police pen or dressed in black staying mobile, you all did a an amazing job, even more respect to comrades from across the UK who came down! Many thanks!

— Please remember if you choose to upload photos from your day to blur/block out faces or put the Saffy logo over them, never ever tag people on facebook, this is important for personal security and the safety of ongoing activists —