*Article below from The Birmingham Mail (The mail is not naming who they are talking about here so 3CAFA to the rescue .. it’s Darren Clifft from Walsall)

A Midland Ku Klux Klan admirer has defended his mock golliwog hanging stunt as “just a bit of fun”.

The man, who the Sunday Mercury has decided not to name, said: “I didn’t realise I was doing anything wrong.”

And he stressed that “it wasn’t planned” and that he was “egged on”.

The 23 year-old, from Walsall, was pictured holding a noose around the neck of a black doll at a music gig in Swansea last month. He later posted a video of the incident on Youtube.

His actions have been condemned by a Labour MP.

But the man told the Sunday Mercury: “The gig was absolutely brilliant. One of the best nights of my life. As I was hanging the golliwog the band was playing American Country and Western music and Johnny Rebel hits.

“It was all in jest and I don’t regret a minute of it and would so the same again.

“The mistake I made was to put a video of the ‘lynching’ up on YouTube.

“I didn’t realise I was doing anything wrong. I wasn’t inciting anyone to go out and lynch black people because it’s against the law.”

He added: “I admire the Klan and its Christian values and believe in racial segregation.

“The UK is only for white indigenous folk and everyone of colour should be settled in one small area out the way or better still deported back to their place of origin.”

“Police need to carry out a thorough investigation because individuals like this have the potential to cause serious damage in our communities through word and deed.

“He appears to show no remorse.

“His behaviour is just not acceptable in this day and age.”

The shocking images were captured at an event organised by Blood and Honour, a “white power” music ­network.

It took place after a “White Pride World Wide” march in the Welsh city.

The man told the Sunday Mercury that he had not planned to mock up the hanging of the golliwog.

He said: “The lynching wasn’t planned, but somebody from the Welsh National Front had bought along this stuffed golliwog he’d made to the gig.

“Everyone egged me on to re-enact what used to happen in the deep south of America to bad black people who had done something wrong.

“Innocent black people were never lynched and people forget that bad white people were also lynched by mobs too.

“The blacks were targeted for the better good of society there at the time.”

Johnny Rebel is a controversial American Country and Western singer whose songs, with incendiary titles like “Stay away from Dixie” and “Move them N*****s North”, were popular in the Deep South in the 1960s and 70s.

His lyrics were often supportive of the Ku Klux Klan and included derogatory references to black people.

Darren Clifft in and out of uniform

“THE Turkish owner of a Malvern kebab shop and his staff were subjected to racist jibes by a gang of youths, Worcester Crown Court was told.

The youths – referred to as yobs by Recorder Adrian Redgrave QC – massed outside the shop in Moat Way and pulled up their hoods to conceal their identity from CCTV cameras.

An employee arriving for work was greeted by racist chants and was attacked in June last year, said Mr Cooke. Seven came to his assistance armed with a steel sharpening tool. It was brought out as a deterrent and caused the youths to flee.

Months later in October, there was another demonstration outside the shop. Seven was obstructed as he came out with a delivery and became involved in a fight with a teenager.

Mr Cooke said he admitted head-butting the youth and he also pleaded guilty to having an offensive weapon in a public placeduring the June encounter.

Timothy Burrows, defending, said things had calmed down since the October incident and two youths were to appear before magistrates. Mr Seven intended to carry on with his business.

Recorder Redgrave told Seven that he had been more sinned against than sinning. He had been the victim of unpleasant and illegal behaviour.

He gave him a 12-month conditional discharge for both offences coupled with a £15 victims surcharge.

“And he advised the defendant: “Don’t give in to yobs.”

“3CAFA would urge shopkeepers/business owners in the three counties area who are, or have been, subjected to racist abuse to contact us via the contact page“

Opposing the “March for England” 2013

A few pictures and a video showing the huge and varied opposition shown to fascist scum who were pretending to march under the banner of St George in Brighton today. Links to independent reports from the day at the foot of the post. 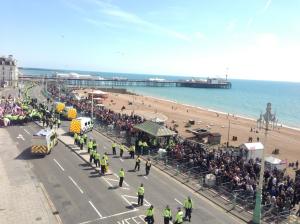 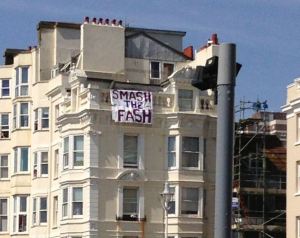 MfE battered and humiliated on the streets of Brighton (EDLNews)

Brighton 24th April 2013 – Something For Everyone!!! (Anti-Fascist Network)

“VANDALS have defaced a giant UK Independence Party election billboard in Worcester so it reads like a BNP advert.

The sign, at the bottom of Newtown Road and one of four UKIP posters in the city, was scribbled over in ink and paint so it read like an advert for the far-right British National Party.

Bosses decided to take it down over the weekend and have hit out at the perpetrators. Carl Humphries, UKIP organiser for Worcester and Mid-Worcestershire, said: “I can tell you now we have strict ruling over any BNP members who want to join our party.

“We ask prospective members to fill out a form and if they either belong to the BNP now or used to be a member, they have no chance whatsoever with us. It’s a shame but we have always anticipated bits of graffiti going on any political sign, it’s the way it works sometimes.”

At the moment, the party’s other three adverts in Sherriff Street, Midland Road and next to Shrub Hill Station have not been targeted. Meanwhile, party organisers have come in for criticism after activists printed a leaflet asking people to vote on the wrong date for May’s elections.

As well as Worcestershire County Council’s election count, a by-election is taking place on Thursday, May 2 for the Chase seat on Malvern Hills District Council.

The by-election has been sparked by Councillor Steve Brown resigning from both County Hall and the district council in order to run his own publishing business. UKIP has circulated a leaflet around the ward asking people to vote on Sunday, May 5, in error.

The leaflet has been put through doors with a silver sticker covering it up. Councillor Lucy Hodgson, who is standing for the Conservatives for the Chase County Hall seat, said: “There was this silver sticky tape stuck over the date – we were surprised it had gone out like that.”

Mr Humphries said he “could not believe” the mistake had been made, but insisted UKIP was still getting a positive reaction on the doorstep. The leaflet was laid out and printed before party members realised the typing mistake.

“The reaction on the doorstep is positive, that’s what our focus is,” said Mr Humphries. UKIP is standing 42 candidates next month.”

By 3cafa
From avtonom.org

Last autumn, a longstanding case against Nizhni Novgorod anti-fascists was returned to investigation, and for a while it seemed like a final victory. However, in contrary to these expectations, the case returned to court this spring and things do not look too good.

Pavel Krivonosov is one of the accused of the fabricated case. He is a social activist, a musician and anarchist. As the set-up has been going for a while, number of charges passed the statute of limitations and were tossed out from the court – political “extremist” charges included.

However, he is accused still according to part 2 of the statute 213 of the Russian criminal codex (hooliganism committed with a group of people), which carries a maximum sentence of 7 years in prison.

It is not doubt that this case was fabricated by Nizhni Novgorod officers of Center of Counteraction Against Extremism (so-called E-center). Even the Nazi victims of the assault could not recognise Pavel as the assaulter. Prosecution has one single witness, a taxi driver who is providing false testimony and claiming that assaulter was Pavel.

Pavel has an alibi, he was at work, and his employer has testified to prove this. Case of Pavel has been substantiated with a number of other expertises as well. It is obvious, that Pavel did not committed this crime. Repressions against him are motivated solely by his social activism. Currently he is in a need of money to finance legal costs, and we are happy for any kind of help!

Fake “membershop card of Antifa-RASH”, planted to Pavel during search of his home.

You can transfer money to support the anti-fascists in the Kazan-Moscow ABC fund via paypal: abc-msk@riseup.net