By 3cafa
From avtonom.org

Last autumn, a longstanding case against Nizhni Novgorod anti-fascists was returned to investigation, and for a while it seemed like a final victory. However, in contrary to these expectations, the case returned to court this spring and things do not look too good.

Pavel Krivonosov is one of the accused of the fabricated case. He is a social activist, a musician and anarchist. As the set-up has been going for a while, number of charges passed the statute of limitations and were tossed out from the court – political “extremist” charges included.

However, he is accused still according to part 2 of the statute 213 of the Russian criminal codex (hooliganism committed with a group of people), which carries a maximum sentence of 7 years in prison.

It is not doubt that this case was fabricated by Nizhni Novgorod officers of Center of Counteraction Against Extremism (so-called E-center). Even the Nazi victims of the assault could not recognise Pavel as the assaulter. Prosecution has one single witness, a taxi driver who is providing false testimony and claiming that assaulter was Pavel.

Pavel has an alibi, he was at work, and his employer has testified to prove this. Case of Pavel has been substantiated with a number of other expertises as well. It is obvious, that Pavel did not committed this crime. Repressions against him are motivated solely by his social activism. Currently he is in a need of money to finance legal costs, and we are happy for any kind of help! 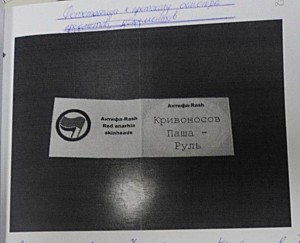 Fake “membershop card of Antifa-RASH”, planted to Pavel during search of his home.

You can transfer money to support the anti-fascists in the Kazan-Moscow ABC fund via paypal: abc-msk@riseup.net