So a bomb outside a mosque isn’t designed to “terrorise”?

Seems like plod and the state are being very selective with their words concerning racist or possible racist attacks since drummer Lee Rigby died. If an army barracks/ Govt building was firebombed or an explosive device was found nearby they would hardly call it a “hate crime”… 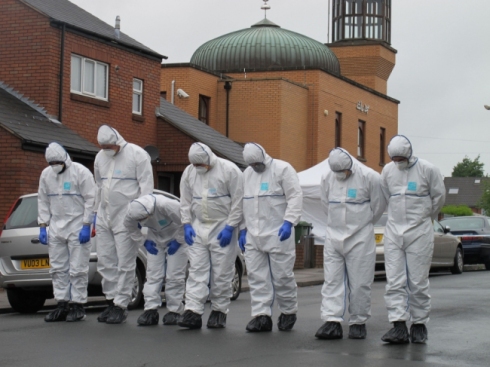 Counter-terror police have been called in to assist with a major hate crime investigation after a small home-made bomb that had exploded near a mosque was discovered on Saturday night.

Around 150 people were evacuated from their homes, and 80 had to stay in temporary accommodation in the Caldmore area of Walsall on Saturday night to allow bomb disposal experts to make the device safe.

West Midlands Police confirmed the blast heard by residents on Friday “appeared to be consistent” with the device exploding. The remains of the device were not discovered until the following evening, when a member of the public found the remains. No one was injured and the device caused minimal damage.

The device was discovered in an alleyway adjoining the Aisha Mosque and Islamic Centre in Rutter Street on Saturday by a local man who took it home and showed it to his wife.

Later, the mosque’s imam also took the remains home before anyone realised their significance. Eventually members of the committee and local residents gathered at the mosque and decided to call police about the item, which reportedly contained a battery.

Assistant Chief Constable Sharon Rowe said on Sunday evening: “The force is taking this attack against the mosque very seriously and we have a major investigation under way.

“To that end, I have called in support from all over the force, including the West Midlands Counter Terrorism Unit, which has a number of experts supporting the inquiry.

“Specialist investigators have been working all day and continue to ensure that we maximise every opportunity from the crime scene.”

She added: “At this stage we are keeping an open mind on a motive, but have recorded it as a hate crime.”

She described a hate crime as: “Any criminal act committed against a person or property that is motivated by the offender’s hatred of people because of their gender, race, religion, disability or sexual orientation.”

In a bid to reassure the community of their safety Walsall police have been patrolling the area, despite believing that the planting of the device was an isolated incident.

“It was found by one of our worshippers who after midday prayer was going home, and he had a look and it looked suspicious, so he picked it up and took it home.

“He showed it his wife and his wife said, ‘Well, it looks like something suspicious so you should take it to the mosque’. So he brought it to the mosque but unfortunately there was nobody responsible in the mosque so he took it back home.

“Then he brought it back in the evening and then our imam had a look at it, and he took it home because nobody thought it was that serious.

“I said it looks suspicious and we decided to call the police. As soon as the police came they said we should not have handled it.”

Mr Ul-Haq thanked officers and the local council for the measures they had taken to support the community in the aftermath of the discovery.

He said: “They have taken this very seriously and they have supported us wholeheartedly and we are very grateful to the police and the local authority.

“We are not suspecting anybody, we are leaving it in the good hands of the police. We have beautiful relationships with the local community and we’ve never had any trouble at all at our mosque.”

Mr Ul-Haq told the BBC that the mosque had been a part of the community for more than 40 years and held strong relations with communities of all faiths, often holding open days for non-Muslims.

“We never ever thought there was going to be a problem and people are still finding it hard that somebody could have targeted us.”

Bomb disposal experts from the Royal Logistic Corps attended the scene to ensure the device was safe and forensic teams spent several hours conducting a detailed search for evidence.

About 80 people evacuated from the area as a precautionary measure overnight were given shelter by Walsall Council, while 70 residents stayed with friends or family.

Councillor Zahid Ali, portfolio holder for public health and protection, said the community was standing together “shoulder to shoulder” in support of the police.

“Walsall has really shown its mettle in coming together and responding with calm determination.”

The incident comes after a number of recent events at mosques following the murder of Drummer Lee Rigby in Woolwich, London. Last week two men were charged in relation to an alleged arson at a mosque in Gloucester, and an Islamic cultural centre in Grimsby was hit by petrol bombs last month.