By Malatesta taken from indymedia

The EDL had a less than successful time this weekend.

On Saturday, Tommy Robinson of the EDL held what he called a charity walk but which was in fact a bout of shameless self-publicity and a media grab that fed his nasty little ego for another week but failed to give a much needed boost to his failing and splintered organisation.

Tommy had applied to plod for permission for his ‘Charity Walk’ which Scotland Yard denied and told him in no uncertain terms, in a widely distributed document, that he would be arrested, if he entered the East End.

Here’s a tip: if plod issues a letter telling you they will arrest you if you do something, and you do it, don’t complain when they arrest you. By doing precisely this Robinson got his weekly media fix and so he could disingenuously claim to be some sort of martyr. As opposed to a serial criminal with a long police record. When Robinson contravened the order and was promptly arrested he was luckily accompanied by several TV camera crews all vulturing over him for some easy pickings.

Robinson had said he was going to walk from Marble Arch to Woolwich via the East London Mosque to ‘commemorate’ Lee Rigby the soldier who was murdered recently. Apart from the fact that it was highly unlikely he could manage more than a couple of miles, what an inflammatory trip via the mosque had to do with Lee Rigby’s ‘memory’ is anyone’s guess. The little Muppet set off with cousin Beaker and was shadowed by 3 plod vans and our intrepid reporter from EDL News.

After barely 10 minutes they stopped off for a McDonald’s – which shows they had no intention of doing the full stretch: greasy fried food is not good for long distance walking. After stuffing their faces they set off again only this time losing their rather overweight cameraman who couldn’t match their bovine pace and dropped further and further behind. We eventually saw him again in Woolwich getting a parking ticket outside Wetherspoon’s. Well done.

As the Muppets entered Aldgate there was a confrontation with two anti-fascists which caused Tommy to start whining ‘arrest them! arrest them!’ as the police arrested him. This film shows that KKKev hit out first.

Robinson was dragged off to the plod van where his vain delusions of martyrdom could hatch. In case you don’t know, the charity for which he was embarrassing had rejected him and the EDL’s money as toxic (Help 4 Heroes also rejected EDL money) so his march was not for a sick girl but for a sick boy desperate for column inches. The Rigby family have also publicly distanced themselves from Robinson.

Meanwhile, we headed off to Woolwich where the Armed Services Day was in full swing. After searching the area we came across a group of 20 anti-fascists but very few EDL. As we headed back into Woolwich we found the EDL unsurprisingly kettled by plod in Wetherspoon’s.

They didn’t get the chance to lay flowers in memory of Rigby as the Army barracks didn’t want them hijacking the day and so their mission completely failed. Instead, they did what they do best: got pissed on cheap lager. Well done.

So all in all not a great day for the EDL: leaders arrested; followers denied laying flowers; poor turnout and all round recrimination from right and left for Robinson’s shameless hijacking of Armed Forces Day, Rigby’s murder and the little girl’s charity with even some halfwit bugles from the far right Casuals claiming that he is a ‘f***ing attention seeking, money grabbing parasite.’ Well said you wee arsespangle! 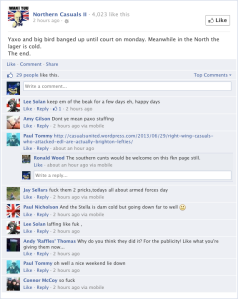 As was intended the EDL foot and mouth soldiers immediately started whinging, claiming that the police were enforcing Sharia law – which was almost as good as when they referred to David Cameron as ‘a cultural Marxist’ (whatever that means).

The EDL balloons also claimed that Whitechapel is a ‘no-go area’ for non-Muslims. Sorry fellers but anyone who cares to stroll up Brick Lane for a fine salt beef bagel, stop for a pint in one of the many bars or perhaps even do a wee bit of shopping in Spitalfields will tell you that this is a blatant and absolute lie by made up by people who have obviously never even been there.

Despite Robinson getting plenty of publicity this week, the EDL completely failed to mobilise any significant numbers on the day or indeed organise much beyond a round at ’Spoons. Be seeing you!
Malatesta