From The Birmingham mail July 7th 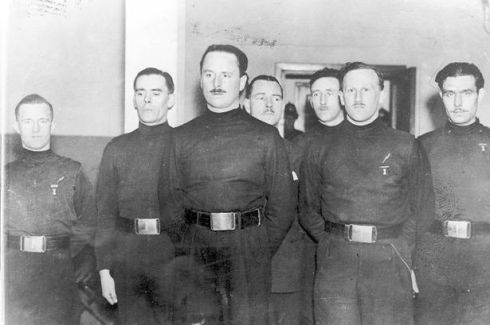 Calling themselves the 21st Century Blackshirts, members look up to former Smethwick MP and Nazi sympathiser Mosley as their spiritual leader.

In the 1930s Mosley’s British Union of Fascists aligned itself with Nazi Germany and Italian dictator Benito Mussolini while its paramilitary footsoldiers, dubbed the Blackshirts, terrorised Britain’s Jews.

Set up in January, the party has named 54 “officers” from across Britain on its web page which has already had more than 50,000 hits.

A Sunday Mercury investigation has discovered that its top two Midland representatives are former soldiers while other district officers in the region include failed local election candidates for the British National Party.

Others have links to the English Defence League including the party’s Gloucestershire Divisional Officer Clive Cerrone who is currently awaiting trial accused of setting fire to a local mosque last month.

The party website also lists representatives in 11 nations including the US, Australia, Italy and Poland.

One banner on the site reads: “Some people are fascist. Get over it.”

Members are encouraged to dress in paramilitary blackshirt style uniforms, like the type worn by fascist Mussolini’s private army during his authoritarian rule.

Their site — which shows Mosley’s fanatical followers performing the stiff-armed fascist salute — boasts: “This will be an historic occasion, the first official Blackshirt meeting to be held since the Second World War, heralding the return of a registered fascist political party in Britain.”

The 45-year-old, from Sheldon, Birmingham, lists Paganism and Wicca as pastimes on his Facebook page.

The party’s West Bromwich officer Jennifer Howells has also stood for election under the BNP banner in local government elections.

She sought torepresent Sandwell in 2010.

And its Worcestershire officer Brian Meaker, who strikes a menacing pose handcuffed in an Gutanamo Bay style orange jumpsuit, is a life-time member of the BNP.

The NBU’s latest recruit is its Walsall officer Matthew Moloney, a 35-year-old dad-of-two and former soldier with the Royal Monmouthshire engineers regiment.

He claims to be a carpenter for Birmingham City Council, but a council spokesman said he was not directly employed.

The BNP has tried to distance itself from the fascist party saying it was a “nondescript sideshow.”

Deputy BNP leader Simon Darby said: “We don’t condone or have official links with any other parties and I think you’ll find such splinter groups rise and then break up very quickly.”

A key NBU member is former ‘Policies Officer’ Matthew Gill, a charity worker and Doctor Who fan, who heads the Warwickshire chapter.

On the NBU website an article on immigration in Gill’s name reads: “There are those who will say there is nothing wrong with massive Third World immigration so long as they learn the language, adapt to the local culture and so on. This presupposes that the human being can be intentionally colour blind.”

Gill’s blog posting adds: “The truth, of course, is that even if a Kenyan can speak perfect English, even if he wears English clothes, uses English slang and attends the C of E, none of that makes him English!”

The party claims not to be racist or anti-semitic but a careful look at its constitution reveals a bitter hatred of multiculturalism and non-white immigrants.

Its immigration policy states that immigrants “… must be prepared to totally leave their past nationality behind them. Racially and ethnically they must be compatible with the majority population where they wish to settle.

“This does not mean being exactly the same, but that they are at least similar enough that their assimilation will be smooth, and have no negative effects on the native population.

“The same goes for religious beliefs. They must be the same as the majority or at least similar enough so as to have no problem adopting the established values and moral code of the nation.”

“Differences cause problems and excessive diversity leads to nothing but trouble.” It adds: “Freedom of religion would not be absolute. All ties with the former homeland of the immigrant will be cut.

“Multiculturalism does not work and only ruins all cultures involved.”

Gerry Gable, from anti-fascist magazine Searchlight said that the NBU was a sinister organisation with many members claiming to be Pagans or followers of Satanic and Wiccan cults.

He said: “Mosley was a Nazi sympathiser and he eventually changed the name of his party to reflect Hitler’s influence and called it the British Union of Fascists and National Socialists.

“This new incarnation of his notorious Blackshirts is clearly attracting the dregs from other far-right groups but I don’t think it will survive.”

Gary Fiennes-Hastings, editor of far-right monitor website EDL News added: “Time and time again groups try and reform the fascist ideology but this country has a long and proud tradition for fighting fascism.

“We must never forget that our grandparents and great grandparents gave their lives fighting the ideology that these people are promoting.”

The Sunday Mercury has contacted each of the Midland members identified as NBU members to ask them to comment on their views.

But each one directed us to their head office. Last night Gary Raikes, NBU founder – who has taken on Mosley’s preferred title of Leader and signs off his correspondence with ‘Hail Britannia’ – told the Sunday Mercury that he was in favour of racial segregation.

He said: “We do not imply that only people from Caucasian Christian origin would be welcome to the UK, we state that whatever their racial origin it would be better if they settled in areas that are made up in the majority of that origin, black, white or whatever.

“Officers can belong to whichever political party they wish at this time.

“We have no official links to either EDL or BNP, both failed movements, in our opinion, and have nothing to offer British Fascism.”

Sir Oswald Mosley was born into an aristocratic family in 1896 and grew up in Staffordshire before serving as a Labour MP for Smethwick in the 1920s.

In January 1932 he visited Benito Mussolini and was so captivated with the Italian dictator and his National Fascist Party that later that year he founded his own British Union of Fascists, BUF.

In 1938 Mussolini passed laws barring Jews from universities and many professions and later when Germany occupied parts of the country, more than 7,000 Jews were deported to Nazi concentration camps, with many dying at Auschwitz.

Mosley returned to England to organise marches policed by his paramilitary Blackshirts and the government was sufficiently concerned to pass the Public Order Act 1936, which banned political uniforms and quasi-military style organisations.

An MI5 report from a British Union of Fascists rally in the 1930s revealed: “The significant feature was to express determination to defeat the enemy (The Jew) if not by the ballot box then by other and more drastic means, a sentiment cheered to the echo.”

In May 1940 the BUF was banned by the Government, effectively killing off the movement, and Mosley was interned for most of the rest of the war.

On his release an undeterred Mosley continued to campaign on an anti-immigration platform, calling for forced repatriation of Caribbean immigrants as well as a prohibition upon mixed marriages.

His papers are housed at the University of Birmingham’s Special Collections.

Police are investigating a Midland man after the Sunday Mercury alerted officers to threats he made against local mosques.

Peugeot worker John Molloy, from Coventry, told followers on the English Defence League Facebook website that he would “guarantee a few will get bombed tonight” just days after the Woolwich terror attack last month.

He went on to urge people to “Take to the streets” in support of English Defence League leader Tommy Robinson after he was arrested.

Robinson has been released on police bail after he was arrested on suspicion of obstructing police in London.

Mr Molloy, from Wyken, could not be contacted for comment last night.

A West Midlands Police spokesman said: “ The Force Intelligence Department will assess the content of the files you have sent to us and take any appropriate action.”