Debris and nails were found near a mosque in Tipton following an explosion that was this afternoon being treated as terrorism.

Police evacuated a large part of the town after a loud bang was heard by residents living near the Kanz-ul-Iman Muslim Welfare Association Central Jamia Mosque in Binfield Street.

Residents said shortly after that they had discovered debris and nails.

Officers were called to Binfield Street just after 1pm and a cordon was set up immediately.

There are no reports of any injuries, but police have evacuated the area as a precaution.

Wasin Kahn, a member of the congregation spoke of how he heard the explosion.

The 23-year-old who lives on Park Lane East in Tipton  said: “I heard a loud bang, at first I didn’t think anything of it.

“The police were called and they evacuated the mosque and some houses at the back. There are around 20 police cars here, we just don’t know what’s going on.

A resident of nearby Crompton Road said she was alerted to the incident when she saw police cars racing past her home, she said: “I was about to go out shopping at around 2pm and saw a number of police cars flying down Victoria Road and I thought ‘what’s going on here?’ “I didn’t think much of it then I got a call from friends asking if I was safe.”

John Brown who works at The MOT Bay on Sedgley Road East said: “I heard a bang and it sounded like a gas canister going off but we’re next to a tyre place and I thought it could have been a tyre that had blown.

“As soon as I saw the police coming down here and the streets being sealed off I knew it was something serious. The police helicopter is hovering above us.”

Commercial manager Mark Watton was just yards away when he heard ‘an almighty bang’.

Mr Watton, aged 49, from Bloxwich, was working on his late mother’s house in Coneygre Road at the time.

“The house is the other side of the railway embankment from the mosque, probably less than 50 years away,” he said.

“I was working at the house and heard this very loud bang. It was just after 1pm. I rushed outside but couldn’t see anything or anyone. I popped out to get some spare parts a few moments later and when I came back, 20 minutes later, the whole area was sealed off by the police.”

..Finally, not being classed as a “hate crime” 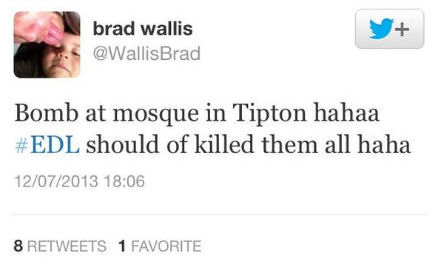 More on the continuing wave of racist attacks against mosques here