“On Saturday 9th November, notorious fascists and neo-nazi has-beens called a demonstration in support of the jailed leadership of the murderous neo-nazi Golden Dawn party at the Greek Embassy in London. 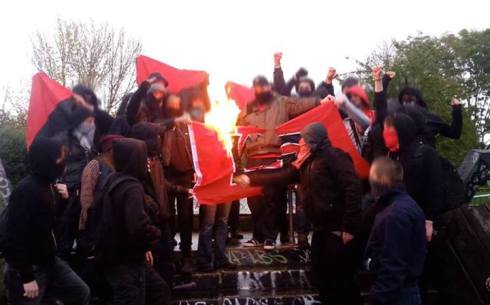 A Neo-Nazi Golden Dawn flag goes up in smoke

Over 40 militants from the AFN responded in a co-ordinated action to send a strong message to those attending or thinking about attending neo-nazi and racist demonstrations – that they are not welcomed and they will be opposed. The message was spelt out to them with a “frank discussion” before the demonstration. For all their talk of “smashing the reds” not one of the 12 fascists said a word, instead the sense of shear fear on their faces would hopefully make an impression and knock some sense in the younger attendees that were present. Around 5 of the younger fascists were escorted out of the pub onto trains by AFN militants and told to fuck off home.

After we had left the remaining fascists, who had hoped for a large police presence at their pub but with none insight, pleaded with community support officers to escort them to the demo as they were too afraid to leave. They ended up getting taxis to the embassy. 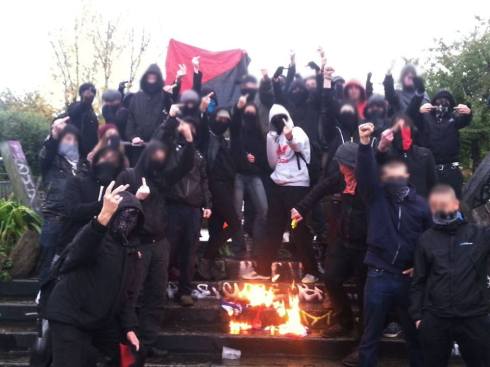 Our aim was to never attend or call a counter-protest, if we had we would have had given the 30-35 odd balls that turned up a sense of importance and the cops more intel. The location of the embassy and the high police presence meant that any counter protest would have been completely in the control of the cops. Different situations require different tactics.

After the action, seized Golden Dawn Flags were burned. We give our total solidarity to our working class brothers and sisters in Greece, the many migrants who are struggle against racist and fascism and to our Brother Pavlos who was murdered by Golden Dawn members.