Yesterday evening’s demonstration against the EDL in Bristol seems to have gone well despite short notice. 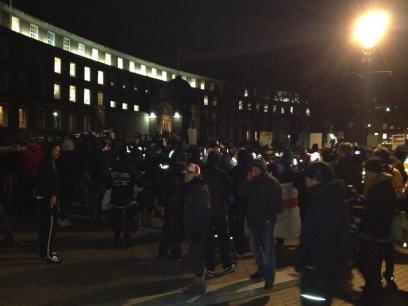 The local Bristol EDL had called a demonstration outside a meeting that was to be discussing an application to convert the empty Jesters comedy club in Stokes Croft into an Islamic religious and cultural centre. The event was to be for members of the Assahaba Centre group proposing the development to “discuss the objectors’ concerns and provide a better insight into the Islamic faith”. Funnily enough no one objecting to the development was interested in this and the meeting was cancelled due to lack of interest from objectors. The EDL not interested in actually hearing about the Muslim faith from some actual Muslims? Who’d have thought?

The council made the decision to approve the mosque application the day before the EDL protest.

So the EDL held a barely half hour long protest outside a meeting that wasn’t happening because they refused to go to it, before they headed back to the pubs they came from. 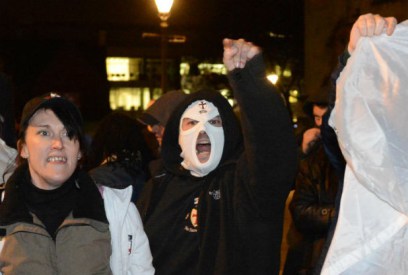 There was a frank exchange of views and some minor skirmishing.

For more background on the Stokes Croft Islamic centre and the EDL’s campaign against it, including multiple threats to “burn it down”, see our previous post.

This particular local struggle in Bristol may not be over yet, but this was a positive moment, showing that the EDL will be opposed wherever they raise their heads.