The men, who were either members of or associated with groups including the National Front,  the English Defence Force or North West Infidels punched and kicked people heading for a fundraising gig at the News From Nowhere Bookshop on July 6 last year.

The attackers, some of whom were wearing masks, punched and kicked their victims who were pursued into the Tabac where the violence continued, sending tables and chairs flying.

Anya Horwood, prosecuting, said: “It would appear that the motivation for this violent disorder was polarised political opinions and personal enmity. The attacking group shared right-wing beliefs and the victims anti-fascist.”Witnesses described seeing the group hanging around outside the nearby Sainsbury’s store and thought they were about to raid it before they went to the Tabac and started “beating people.”

Those inside described three “punks” outnumbered two to one being beaten to the floor and one suffering a golf ball sized lump to his head.

Liam Pinkham, who was at the front of the attack having crossed the road to remonstrate with a man he had previous dealings with, was found a short time later cowering on top of a multi-story car park with another attacker Stephen Dumont, then aged just 16.

Matthew Coates, 22, was found on Roscoe Street with a mask and St George’s flag in his pocket and said: “OK you’ve got me” while Shane Calvert, 31, was found near Lime Street out of breath with bloody knuckles.

Pinkham, of Whetstone Lane, Birkenhead; Dumont, 18, of Rosewood Close, Netherley; Coates, of Albert Road, Southport; Michael Kearns, of Dovecote Avenue, Dovecote and Nathan Smith, 21, of North Road, St Helens, all pleaded guilty to violent disorder – though Smith failed to turn up to the hearing and a warrant was issued for his arrest.Two men from Blackburn Peter Hawley, of Ailsa Road, and Shane Calvert, 31, of Shetland Avenue, admitted the same charge.

Some of the men admitted being members of the English Defence League whereas others denied membership though they offered “frank” political opinions.

Judge Robert Trevor-Jones, said: “All of you were either members of, or have associations with, groups which happen to hold right-wing views or positions whether it be the National Front, English Defence Force or North West Infidels. “It is that common factor which brought you all together on Bold Street that evening because you had been made aware there was to be some form of anti-fascist meeting.

“It is quite clear you all went there to Bold Street with the view to disrupting or preventing that meeting taking place even if you did not intend direct violence beforehand.

“Of course in such circumstances involving two groups holding diametrically opposed views there is a clear risk of confrontation as was shown by the CCTV in court.

“Although the violence was short lived it was in full view of passers-by, initially out on the street, and it spread into a nearby cafe causing chairs and tables to be overturned and glasses to be smashed. Calvert, Pinkham, Kearns and Smith were in the thick of it.”

He jailed Pinkham, who had previously threatened to burn down News From Nowhere while making abusive comments about Anne Frank, for 17 months.

Dumont was sent to a young offenders institution for a total of nine months after he was also found guilty at trial of public order offences after shouting racist taunts through a megaphone at a mosque in Ashton Under Lyne, Greater Manchester.

Coates was locked up for ten months; Michael Kearns, 39, for 14 months; Peter Hawley, 53, for 13 months, and Shane Calvert was  given14 months behind bars.

As they were led to the cells their supporters, who packed the public gallery, shouted: “No justice” and applauded them.”
Link
Video of the attack on anti-fascists

NWI Fascists issued this warning shortly after the sentencing

Arrest made after alleged ‘racist’ attack in Cheltenham

Police have made an arrest after it was alleged a man was racially abused and then assaulted in Cheltenham.

A 22-year-old local man was arrested on suspicion of a racially aggravated public order offence and assault.

He has been bailed to return to the police station on November 7.

Officers investigating are appealing for any witnesses to come forward.

A spokeswoman said: “At around 2.45pm yesterday, officers were called to the High Street, outside Poundland, to reports that a man had shouted a racist insult at a 34-year-old local man before throwing an open can of drink at him and assaulting him.

“The victim was not seriously injured.

“Officers are urging anyone who witnessed the incident to contact them by calling Gloucestershire Police on 101, quoting incident number 237 of September 24.”

“MEETINGS are to take place between police and Muslim leaders after a Redditch mosque was attacked and racist graffiti, including swastikas, was painted on the building.

The damage at the mosque in Jinnah Road was caused between 2am and shortly before 4.30am this morning, when it was discovered by a targeted police patrol.

Graffiti including swastikas had been sprayed onto walls and at least six windows, using paint taken from builders’ cabins on the site, which is still under construction.

Entry to the site was forced via a gate and the intruders then broke into the main building. It is not known at this stage whether anything has been stolen.

Police have informed mosque representatives and are currently guarding the site and carrying out local reassurance patrols. Forensic examinations are ongoing.

North Worcestershire police commander, Superintendent Kevin Purcell, said: “For as long as I can remember the relationship between the Muslim community in Redditch, the police and the wider community would best be described as excellent.

“Due to incidents happening nationally targeted patrols have been put in place and these will now be further increased as we will not tolerate mindless attacks of this nature.

“I will be arranging meetings with the chairs of the mosques, local civic leaders and the Independent Advisory Group to reassure them of our commitment and determination to do everything possible to prevent any further such incidents and track down those responsible for this attack.”
Link 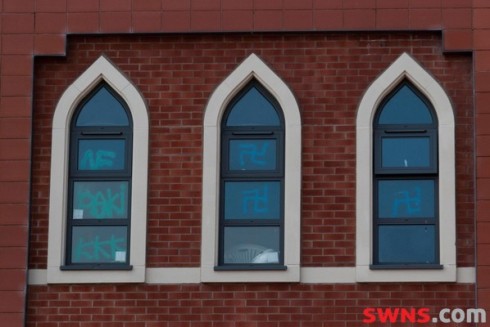 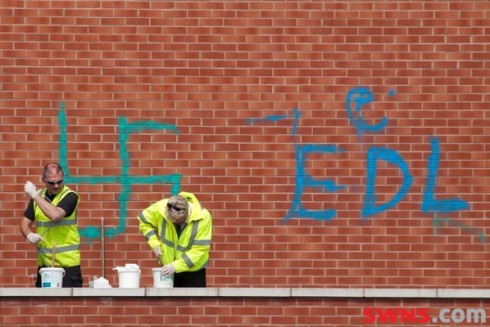 Do you know man who racially assaulted taxi driver? 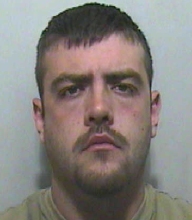 “AN English Defence League mob which descended on an East Lancashire town for a flash mob protest have been branded ‘a pack of wild animals’.

Five of the gang have today been jailed for their parts in the brawl.

One Asian teenager was punched and kicked during the disturbance last July and another Asian man was run over as around 35 EDL supporters rolled into Brierfield last July.

Ringleader Bernard Holmes has been jailed for 18 months for his role in co-ordinating the protest, which ended when a rival gang of Asian youths confronted the mob in the Castle Street area of the town.

His ‘lieutenants’ Leonard Hawley, 47, of Worcester Road, Blackburn, Jason Smith, 43, formerly of Burnley but now of Hollinge Road, Todmorden, David Wilson, 47,of Devon Road, Blackburn, who admitted the same offence, were each jailed for 37 weeks.

David Garratt, 45, of Beckett Street, Darwen, who confessed to possession of an offensive weapon, was jailed for 47 weeks.

Six others from Todmorden, Chorley, Clitheroe and Blackburn were given suspended prison sentences, after admitting using threatening behaviour as part of the same incident.

Passing sentence Judge Norman Wright said freedom of speech was something enjoyed by everyone in the UK, no matter how repugnant the views expressed may be.

But the judge, sitting at Preston Crown Court, said the events of that day saw ‘middle-aged men running around like a pack of animals’.

Earlier that day protests had taken place in Accrington and Clitheroe, and outside the home of MEP Sajjad Karim at Simonstone, who said his wife and daughter were left ‘terrified’ by the ordeal.”