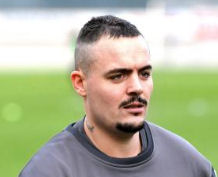 A WORCESTER City Football Club player who likened killing illegal immigrants to a popular video game will now appear in a criminal court in a U-turn decision by prosecutors and police.

City midfielder Lee Smith, aged 28, will appear at Gloucester Magistrates Court on Friday, May 18, charged with writing racially aggravated words likely to cause harassment, alarm or distress to the public say police.

It leaves the player’s future at St George’s Lane in doubt, with his contract up at the end of the season.

Smith has always denied any wrong-doing since posting the comments on Armistice Day last year, and apologised for any offence given at the time as we reported.

He made the comments on his now deleted Twitter social media account sparking an online row, with some branding him a racist – a claim he denied.

Smith later said he had “not meant to offend anyone”.

At the time, police gave Smith a stern talking to but said there would be “no further action against him”.

It has since emerged over the weekend that Gloucestershire Police and the Crown Prosecution Service have decided to issue Smith a summons to court over his comments following what the police force had said was “a joint review of the circumstances of the case”. When asked what had prompted the review, a spokeswoman for the force said “where a decision has been made for no further action [to be taken] that decision can then be reviewed. That is why he was issued a court summons, rather than being charged,” she said.

Asked if the review had taken place because of pressure from the public, the force spokeswoman said it was not the case.

“We weren’t getting calls about it – the review was carried out jointly by police and the CPS.”

Colin Layland, city’s vice-chairman, said the club had only become aware Smith had been summonsed to court at the weekend.

He said Smith’s contract ran until the end of the season and “any decisions on the football side will be taken by the manager”.

Carl Heeley, club manager, said “everything had already been said” on the matter and declined to comment further.