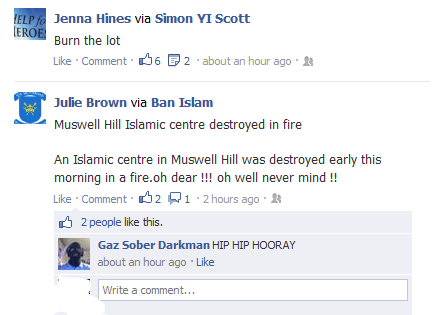 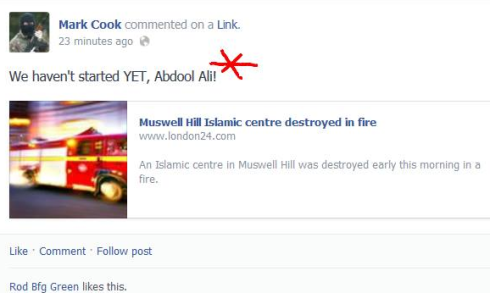 Shoppers at the Touchwood Centre in Solihull looked on in horror this afternoon (Saturday) as the EDL far right extremists waved flags and shouted anti-Islamist chants as they passed by.

Pav Sehra, 22, from Solihull, saw the commotion as she left the main shopping area and saw the protesters at Brueton Gardens, on Warwick Road at around 1pm.

She said: “I think it is ridiculous.

“They shouldn’t be allowed to do it in public.”

The demonstration was organised by Matthew Pile, who runs the EDL Birmingham Division’s blog and is based in Sutton Coldfield.

Members came from as far as south east London to take part.

“We were expecting around 50 people to turn up but we’ve got a few more than that.

“No anti groups have shown up but I don’t know what will happen if they do.”

West Midlands Police said that they were aware of the demonstration and would be deploying officers to the area.

Right wing extremists from the British National Party said they did not want to be associated with the event.

BNP member Ian Stock, from Sheldon, called the Sunday Mercury to distance himself from the rally.

He said: “They have just sent me a text message saying they are holding an demonstration against Islamification in the West Midlands.

“We do not agree with anything they are doing today.

“I saw what they did in Dudley.”

Mr Stock was referring to violent scenes in Dudley as the EDL protested against the opening of a mosque there in June 2010.

Several people were injured when bricks and metal security fences were launched at riot police and 21 arrests were made.

Violence flared as United Against Fascism staged a counter protest at the same time.

A 16 year-old girl suffered a broken leg and six people were knocked over “like skittles” by a car fleeing the far right protesters in one demonstration.

Shops in Dudley had closed early and some boarded up windows as the EDL demonstrators descended on the town.

* Matthew Pile has been charged with attacking a man on the bus in the city centre.”

Great write up on indymedia “EDL outnumbered by trees in Solihull“

Fresh from having their main website hacked again last night the ever persistent flotsam and jetsam of what was “Britain’s biggest street movement” (according to themselves) arrived in Norwich today for a so-called ‘national demonstration’ numbering around 150 if that.

The people of Norwich were out in considerably larger numbers (*an estimated 1,500 according to mainstream press reports) to give the bedraggled ‘leaderless‘ boneheads the rousing welcome that they deserved by letting the racists know in no uncertain terms that the hatred spread by the EDL was definitely not welcome in the city as the video below clearly shows.

Meanwhile EDL neo-nazi splinter group the ‘infidels’ were out in West Ham having an equally shit day.

Meanwhile, the weekend before in Liverpool…

On the day however only roughly 20 of the fash turned up, this was met by a joint mobilisation of antifascists who outnumbered them 3-1, as the fash settled comfortably into their police protected protest area near the town hall another 20 antifascists turned up and stood amongst the fash, the fash then backed off and stood looking uncomfortable until police moved into to move the antifascists to their proper place.

Unsurprisingly the fash became suddenly more vocal once the police safety was reinforced, but this just further added to their humiliation, one fascist was keen to remind antifascists that ‘the police are on our side not yours’ roughly translated and taking the events into consideration i believe this meant ‘These police wont let you get us’ the police had several attempts at kettling antifascists, which didn’t seem too effective and many managed to break the line.

Far right poster boy and jail bird Liam Pinkham bumped into a group of militant antifascists and recieved a taste of his own medicine, for his first demo since his release from prison this should really make him question his involvement in politics all together.

last night was a really successful night for antifascism in Liverpool, everyone played to their strengths, there was a counter demonstration that massively outnumbered the fascist mobilisation, and sizeable groups were scouting and looking for fash outside of the demo.

The only group which refused to turn up was the Socialist Party in Liverpool, who really need to question their morals, having witnessed them sharing church street with fascists and ignoring the fascists all together to talk about the NHS, how can they refuse to stand with other antifascists AGAINST fascists?”

Fash yesterday giving it the ‘big un’ from the safety of a pub (great choreography with zee fingers) .. (CTRL and + for closer view in firefox)

The aftermath as told by EDLNews.

“English Defence League members celebrated the Queen’s Diamond Jubilee this weekend by throwing Nazi salutes after they turned up at an alternative Jubilee event in Newcastle upon Tyne city centre.

The attack, organised by EDL North East regional co-ordinator, Alan Spence and his friends from the National Front took place near the Monument and Sky News ran footage of firecrackers and bottles being thrown at families attending the event.

Our picture (above) shows EDL members standing alongside National Front members who are displaying a flag with the Nazi insipred ‘14 words‘.

Spence has recently been released from prison on licence for an attack on a non existent meeting by the SWP at the city’s Irish Centre. Spence is thought to be the link between the English Defence League and other neo Nazis in the North East.

Footage from Sky News clearly show EDL members sieg heiling as abuse was shouted and objects thrown which goes along way to disproving their claims that they are not a  racist organisation.

The attack concluded with Northumbria police moving them on.”