If there ever was a modern-day vigilante hero, so to speak, this is him. An acknowledged Antifa leader, Aleksey had been continuously hassled by the joint efforts of all varieties of Russian popo, until the “anti-extremist” squad finally managed to pin him down (under similar circumstances as depicted below) on fabricated charges in 2012.

Along with several other prominent antifascists, Aleksey had spent almost 2 years in jail awaiting a “trial” that never came. He was finally released under Putin’s bullshit amnesty only 3 months ago. Pigs however, being pigs, are obviously unable to let go of an old grudge and are now back at him in full-force (when they’re not too busy toppling neighboring states, shooting protesters from machine guns and starting WWIII.) 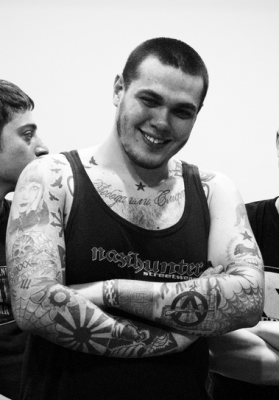 The full article from http://www.avtonom.org

Today, on April 8th, 2014, a Judge of the Moscow Zamoskvorechye Court has again confined Aleksey “Sokrat” Sutuga – one of Moscow’s most prominent antifascists, to jail. He is being charged with disorderly conduct by a group of persons – a criminal offense under Part 2 of Article 213 of the Russian Constitution. Sutuga’s lawyer had pleaded with the judge for a measure of restraint that did not involve detention. Several of Aleksey’s friends had been willing to provide him with living quarters in the case of a house-arrest verdict.

Sutuga was arrested on the evening of April 5th, on his way from an antifascist concert in Moscow’s Izmailovo district . The protocol of his arrest states “hooliganism” as a premise for his detention – Sutuga was allegedly cursing loudly in public. (Although according to some accounts Aleksey had been detained by members of the infamous “anti-extrimist” squad along with riot police.)

On April 6th, however, Aleksey was already taken to Moscow’s Criminal Police Headquarters, where he was told that he is a suspected culprit in a fight that had occurred on January 2nd .

According to Aleksey, that evening he was returning from a friend’s house with another acquaintance, when he had stumbled upon an ongoing fight between a group of 6 vs. a group of 3 unknown young men. According to Sutuga , the group of 6 men was of far-right persuasion, one of them had non-lethal handgun (traumatic weapons are legal and widespread in Russia.) The six nazis are now depicted as Sutuga’s “victims”.

Sutuga says that he had intervened in the fight, intending to stop it and subdue the opponents. His testimony is confirmed by his friend, who had witnessed the incident with him. The victims later identified Sutuga through online photographs, and, according to investigators, his “overly expressive appearance .”

Aleksey’s lawyer drew attention to the fact that one of the victims had already taken part in a face-to-face recognition procedure with Aleksey, and had not declared that he was attacked by Aleksey in his subsequent testimony, as it is stated in the police protocol. In addition, at the beginning of the court session, the statutory 48 hours pre-trial detention period had long expired.

Nevertheless , the judge recognized the prosecutors’ notion that Aleksey could allegedly flee if not detained in jail, and proceeded to enter him government custody until May 6th, 2014.

As a reminder, not so long ago, Sutuga had already been detained for over a year as a suspect in a fight with nationalists in the “Vozdukh” night club. On January 10th, 2014 his case had been dismissed due to a general amnesty.

Repost please, if you care.