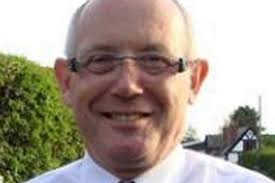 “POLICE have raided the house of a UKIP politician embroiled in a race hate storm – as he confirmed his formal resignation as a councillor is taking place today.

Officers from West Mercia Police have searched the Stourport-based home of Eric Kitson and seized his computer to gather evidence for a possible prosecution.

The 59-year-old has not been arrested, but has been voluntarily interviewed about the saga of his anti-Muslim, anti-Jewish Facebook rants.

He will formally resign as a councillor at 4pm today – despite only winning a seat at Worcestershire County Council 13 days ago.

It means his spell at County Hall is the shortest of any elected politician in the authority’s history, and will trigger a by-election.

A statement released on his behalf by UKIP said: “It is with sadness that I am announcing my resignation as a councillor.

“I am extremely sorry to have let down my friends, the people in the hardworking UKIP team that got me elected, the people of Stourport, and of course my family.

“That was foolish – I am no racist, but I can understand why people could think so.”

The UK Independence Party say a meeting is due in the coming days of its decision-making National Executive Committee, which is almost certain to revoke his membership too.

He was outed over the weekend for filling his now-deleted Facebook page with a host of racist images and cartoons.

Among the most shocking was a cartoon of a Muslim being spit-roasted on a fire fuelled by copies of the Koran.

He also made comments referring to Muslim women, saying “hang um first then ask questions later” and called for the repatriation of “six million migrants and refugees”.

West Mercia Police had received complaints from the public over the saga, and acted by searching his home last night.

A spokesman said: “Eric Kitson, from Stourport, was voluntarily interviewed by officers from West Mercia Police over concerns raised by the public about allegedly offensive and racist comments made on social media.

“A computer was seized and a property in Stourport searched by police for evidence gathering purposes.

“A file has been submitted to the Crown Prosecution Service for their consideration.”

Police have also taken a statement from Mumshad Ahmed, a Muslim former county councillor, who wants him prosecuted for inciting racial hatred.”

Latest (mainstream): 12.06.13:  Support for UKIP plummets by A THIRD – leaving them tied with the Lib Dems, poll reveals