On Saturday 29th June, Stephen Yaxley-Lennon (aka “Tommy Robinson”) and Kevin Carroll, the two leading shitbaguettes of the English Defence League, are planning to do a sponsored walk from Westminster to Woolwich.

The sponsorship money raised by the for the walk has been rejected by the charity “Help for Heroes”. So as they pocket the money for themselves, they want this event as a publicity stunt for the cameras.

The Islamophobic and racist EDL plan to walk through Tower Hamlets, and past the London Muslim Centre and the East London Mosque. They want a propaganda victory which makes them look like “peaceful” demonstrators highlight the “violent” muslims and anti-racist activists.

The EDL plan to celebrate the end of the walk in Woolwich with a demonstration. Carroll and Lennon have asked their supporters not to drink as they expect media coverage and don’t want to appear as drunken thugs who attack women in hijabs on the street and set fire to mosques at night.

We are working class anti-racists, we know the truth about EDL’s lies and we know what the racist idiots’ plans are.

We will not let them pass.

If you want to get involved in organising against the EDL contact: southlondon-antifascists@aktivix.org

Spread the word, we will stop the EDL. 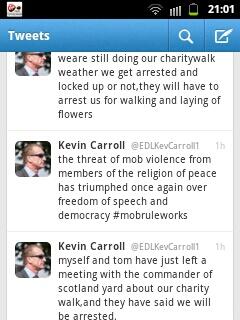